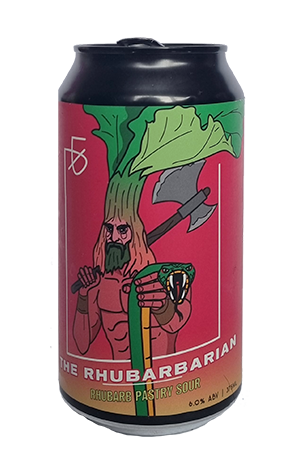 With a mighty axe and pet snake, like a hero from a television show designed to encourage people to eat more veggies, The Rhubarbarian cuts a striking figure. The rhubarb pastry sour is a collaboration between Melbourne’s Venom Beer and Brisbane’s All Inn Brewing, with the concept born in Brisbane back in March after both brewing teams were enjoying drinking sours in the hot sun.

The collaborators came up with the idea of creating a winter sour resembling a rhubarb Danish that would be vegan and lactose-intolerant friendly, so rather than the milk sugar used by many brewers in pastry sours, they instead went heavy on the biscuit and red malts, while adding oats for texture, and vanilla and cinnamon to boost the beer’s dessert edge.

Pouring like a Flanders red ale but tasting like a rhubarb pie with vanilla ice cream, The Rhubarbarian might not impress many traditional Belgian brewers but it will likely sate your desires if you’re keen on enjoying baked goods without doing the actual baking. It’s equal parts sweet and sour, with the rhubarb notes adding to their beer’s tart edge before the rush of sweetness and the beer’s creamy body take over, joined by the slightest hint of cinnamon.