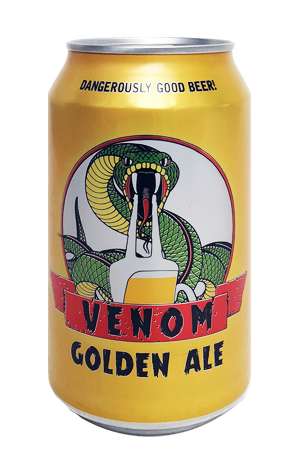 You can tell summer is coming as more and more brewery owners pop at least one of their beers into cans ready for drinkers' Eskies. Venom is on the case too, with the brewing company's flagship Golden Ale the first of three to transition to tinnies (Pale Ale and the mid-strength Refreshing Ale will follow). It doesn't just make for added practicality but it means those who love Venom's striking artwork have even more of it to cling to and those who don't will find it harder to avoid when facing up to a bottleshop fridge door.

The beer inside remains the same – arguably the best golden ale in the country – with its blend of Kiwi hops delivering a lively tropical and citrus hit and refreshingly bitey bitterness. The sample Venom dropped in to Crafty Towers emptied so fast we were sure Mrs Pint must have had a sneaky gulp (she insists she's innocent), which is presumably just how Venom founder Joel Drysdale wants things.