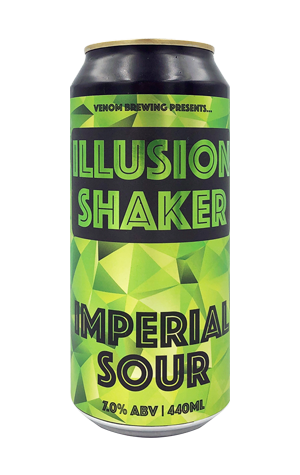 When the conversation preceding a beer involves a long-fomenting concept for a GABS festival beer and a desire to outdo all the stupid things that have happened in beer in 2020, you know you're not going to end up with a classic pilsner. When it also involves a drink popular in Melbourne clubs in the late 80s and early 90s that featured Midori, vodka, triple sec, pineapple juice and fluorescent shot glasses, you know you're not in Kansas anymore, Toto.

Which brings us to Illusion Shaker, Venom's follow up to the Portello Imperial Sour, itself a follisome recreation of a non-beer, and one that wanders even further into delirium. For a start, it's a lurid green, thanks to the use of food dye that Venom's partner brewers at Deeds will be hoping flushes easily from their brewhouse, and while it's been a long time since I had a drink featuring Midori (I am 44, after all) this certainly takes me somewhere, and it could well be there.

It's the sort of beer that might find you asking why, but you can’t deny they’ve got where they wanted. Sweet as much as sour, intensely melony and pineappley. And really bloody green. The label name checks Mickey B, the late Melbourne DJ who played clubs during Illusion Shaker's heyday, even though beer conceptualiser Mik Halse, who worked with him in the 90s, says: "He'd be horrified to have his name associated with any beer that's not Carlton Cold."

It's out in very limited release, so if you want to taste the madness, you'd better move quick before it's gone. Or Midori issue a cease and desist.