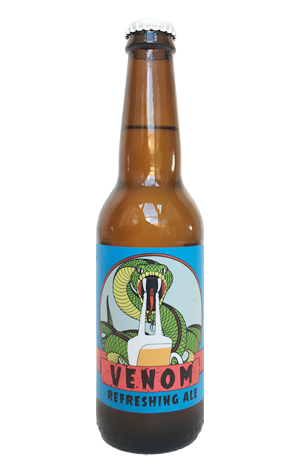 It might not seem the most likely of beers to introduce in a Victorian winter, but by adding a mid-strength quaffer to his lineup we imagine Joel Drysdale had a couple of things in mind: the warmer months ahead and Venom's new home, the Country Club Hotel in Yea – in particular its beer garden.

The Refreshing Ale has now been bottled to become the third of the brewing company's year round beers, joining the flagship Golden and Venom Pale Ale, and looks to keep things simple. In many ways, it's like a stripped back take on the Golden Ale, albeit with Aussie hops in place of the Kiwis. It's paler, has a faint tropical hop aroma, a touch of light malt sweetness and hoppy fruitiness to taste and minimal bitterness. It's got a surprisingly decent body for its size, not to mention a gorgeous, fluffy white head and lacing too, but nothing to get in the way of delivering what it promises on the label.