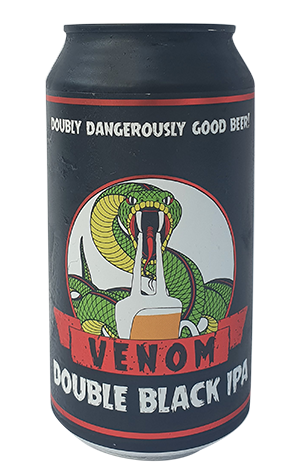 Maybe it's due to the wet summer that flew by but it feels like it's been a particularly cold and dark autumn in Melbourne. And cold weather calls for dark and big beers so what does even colder weather call for? Darker and bigger beer of course.

Venom Brewing have regularly released their Black IPA as a winter warmer for years; with Venom's Joel Drysdale originally concocting the recipe with Temple Brewing’s cofounder Ron Feruglio who had built a bit of reputation on the style. Now for what feels like it will be a particularly bracing winter, the brewing company has dialled that beer up and reimagined it as an 8.3 percent ABV, double black IPA. To riff on Venom's recent run of metal-inspired beers, it's one that could pour none more black and the booze level provides quite a swirl of warmth, with notes of licorice or aniseed and there's quite a plus savoury or umami note tucked in there too. That's not to say it's overly bold or boisterous, instead the hop combination of Columbus, Chinook, Centennial, Simcoe and Ahtanum really lightens the beer's flavour profile and provide a mix of grapefruit, beer and pine to ensure it's as much a hop-forward IPA as Venom's original Black IPA is.