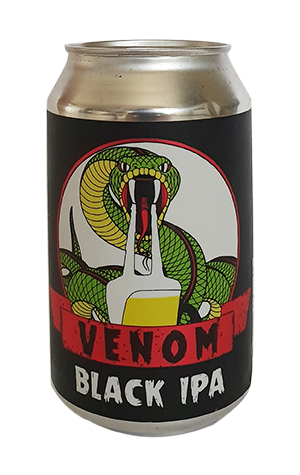 Venom's tattoo artist logo and label design managed to become one of the most talked about in Victoria when the brewing company's first beer, the fine Golden Ale, was released. That was as founder Joel Drysdale intended, with the beer good enough to overcome the brickbats from those who didn't like what they saw; indeed, he was soon brewing double size batches of it at Hawkers.

The Black IPA from they brewing company, which has become a regular winter staple, doubles down on that eye-catching branding by putting it in a darkly clad can. There's little compromise to be found with the beer either; if the Golden is a beer that sits at the very upper reaches of its style categorisation in terms of hop aroma and flavour, here's a beer that is punchier all round.

The Black IPA's genesis began when Joel read one of our weekly newsletters and saw that former Temple and Homestead man Ron Feruglio was stepping away from brewing to consult. He texted asking for Ron's details within minutes and, a few weeks later, was in touch again to say the two had been working together on a black IPA. Why? Well, when at Temple, Ron created one of the first – and arguably the best – local black IPAs (Midnight) and then repeated the feat with Black Swan at Homestead.

This is a somewhat different beast (just 6 percent ABV as opposed to 7) but showcases Ron's love of raiding the ingredients cupboard: no less than seven hops are lurking within. The opaque, near black beer achieves the black IPA's goal of looking stout / porter like, aided by its tan head, before unloading myriad hop aromas and flavours. We picked up, blackcurrant, herbal pine in the former category, with the flavour more of the spicy, peppery sort. But with so many varieties in there, you'll probably find something else. The biggest difference (if memory serves) from Ron's past glories is a more pronounced bitterness – of the hop and bitter chocolate variety, which may well be down to the lower booze content.

In good beer outlets around Melbourne