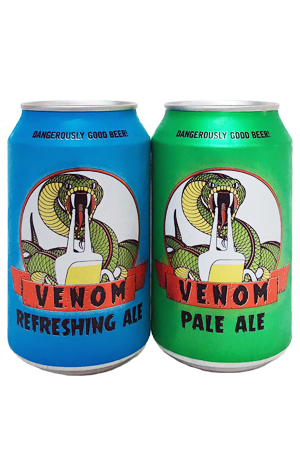 If Venom's spitting snake artwork wasn't eye-catching enough in bottle form, it sure is now they've transitioned beers two and three in the core range into cans where they join the brewing company's flagship Golden Ale. And we have to say the move to cans suits a look that's proven one of the more amusingly divisive ever since Joel Drysdale and his family brought Venom to life.

If you've not tried the beers before, Refreshing Ale is a mid-strength, one that's been doing much of the heavy lifting for them as they try to change the tastes of drinkers in the parts of regional Victoria whence they hail (not least at the Country Club Hotel in Yea that's the home of Venom these days). Enlisted to win over new drinkers is a combination of soft malt base and some tropical, melony aromas and flavours – plus the merest of bitterness – from Aussie hops.

The Venom Pale Ale is one we find sits pretty central in the ever-broadening realm of pale ales. It's not throwing a fruit salad at you, it's not particularly bitter and it's not stripped of everything in the hope that approach will bring mass appeal. Instead, it's a little piney, a little earthy on the hop front, it's pretty lean and the bitterness is there to balance rather than dominate; a drinking pale, then, rather than a thinking one.