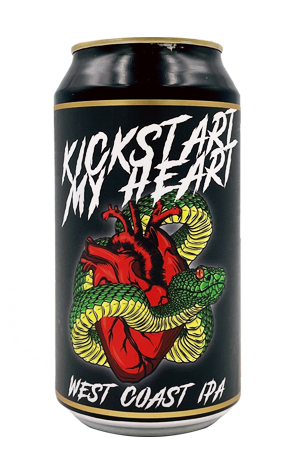 From rape, murder, priests and revenge to skydiving naked from an aeroplane, you can't deny Venom have decided to follow an interesting path with their limited releases in 2021. Here, they follow up their hazy IPA tribute to Cradle of Filth with a trip to the West Coast of the USA inspired by Mötley Crüe, the band some male members of the LNP seem to wish they could be.

Kickstart My Heart, which I keep wanting to write as Un-Break My Heart – a song you have to feel is unlikely to feature in this series of releases – once again turns to brewing company co-founder Joel Drysdale's favoured Kiwi hops – Nelson Sauvin and Rakau – added at a rate of 15 grams per litre dry-hopping. That said, the beer is a far cry from the fruit salad IPAs so prevalent these days; there's a little tangerine and sweet citrus but, aromatically, it's as much about light caramel from the malts. The hops contribute texture and bitterness as much as anything in an IPA that feels like a throwback to times gone by, just like the band that inspired it.