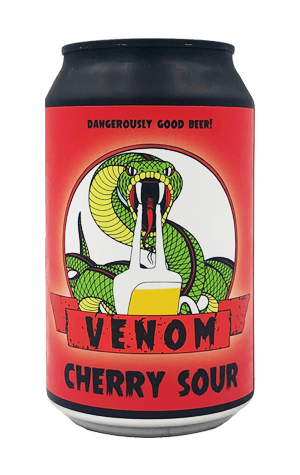 Venom founders Joel and Janna Drysdale built their brewing company upon resolutely normal beers (and distinctive branding, of course). Their flagship is a characterful Golden Ale, while in the early years the "experimental" in terms of limited releases stretched to a winter Black IPA release. As with much of the beer world, however, the times have been a-changing; in 2020, they were involved in releasing a hazy DIPA with Deeds, a triple IPA with Coburg Brewing Co, a dentist-bothering imperial sour version of the Portello soft drink, and a lurid green, Midori Illusion-inspired thing.

All of which makes the appearance of Cherry Sour – a one-off for now that's pencilled in as a potential core range addition – a logical progression. The beer pours a deeper crimson than the bright red label, matching a boiled lolly cherry aroma with flavours that are sweet-meets-mildly-tangy rather than sour. It's not as far from beer's traditions as that recent pair, but still very much a soft drink like offering likely to appeal to those not in the market for beers the way they used to be.