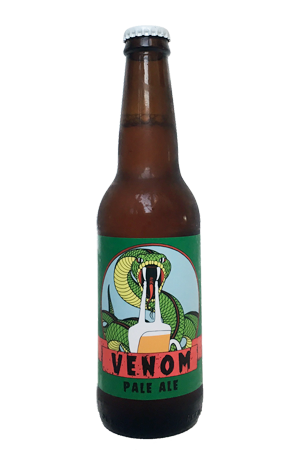 When he was busy launching Venom with his Golden Ale (a beer that we put into our Best New Victorian Beers of 2016 top ten), Joel Drysdale declared that he would never release a pale ale. There were plenty out there already, after all. What's more, his golden ale was a souped up, hoppy affair anyway so why bother? But, like Sean Connery when faced with a fat pay check and Kim Bassinger in a bikini...

So, here it is: the beer that never would be, Venom Pale Ale. It's the second Venom beer that will appear year round (the Black IPA is to be a seasonal release) and manages to distinguish itself quite significantly from its golden stablemate. The combination of new Kiwi hop Moutere (née Brooklyn) with Cascade and Ella puts the beer into earthy, spicy, piney territory (as opposed to the Golden's more tropical bent) and it's as tight, clean and balanced as you'd expect from a beer brewed at Hawkers. It also packs a building bitterness that steadily coats the palate in a warm embrace over time.