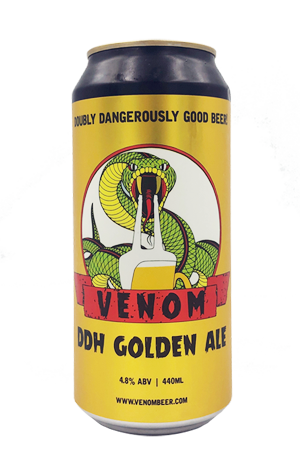 The great golden survivor lives on! As part of our Ten Years Of Crafty series we looked at the changing tastes over the years we've been covering the Aussie beer industry, with golden ales a style that rose to prominence only to be superseded in most breweries' lineups. Venom's has stuck around and it's not hard to see why: if part of the reason many died out is that they're not fruity and hoppy enough, it's not an accusation that can be directed at this beer.

And now, having formerly appeared in Double Hazy form, it's altered once more, albeit not that significantly; here, it merely gets double the usual amount of hopping while retaining its 4.8 percent ABV. A little hazy and still pale yellow gold, aromas of grapefruit, kiwifruit, melon and something kinda herbal and gooseberry-ish are understandably boosted. It seems softer and fluffier on the palate while there’s a cloud like sherbety sweetness enveloping the cracker malts mid palate too, not to mention and an extra sting in the tail and a little lingering grassiness.

It's presumably one of the least commercially viable beers to be called a golden ale ever brewed, and you can tell why.