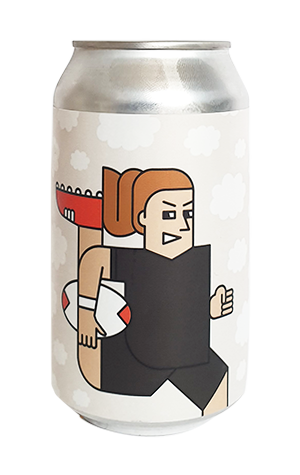 At the start of October, CoConspirators Brewing asked beer fans to come up with a name for their forthcoming New Zealand IPA, a move we’ve been assured doesn’t mean they’re anywhere near running out of characters to cover their releases. Hundreds of people put their thoughts forward, with The Neighbour winning out as the top choice.

Thus, rather than taking the shape of the underworld figures often found on a CoConspirators release, The Neighbour is instead the friendly rugby player down the road who benefits from a far higher calibre of political leader than those closer to home.

The NZ in the IPA comes from using New Zealand malt and Waimea, Wai-iti and HORT 4337 hops; the last of these is an as-yet-unnamed sibling hop to Waimea that’s gaining love from brewers for its intense tropical and citrus flavours. And there’s a lot of tropical to be found in the beer, with undertones of dried pawpaw, lemondrop and orange sherbet followed by pine. There’s a slight biscuit sweetness in there too, one that’s balanced out by a biting bitterness at the end reminiscent of McCaw at his peak killing another sweet move dead in its tracks.