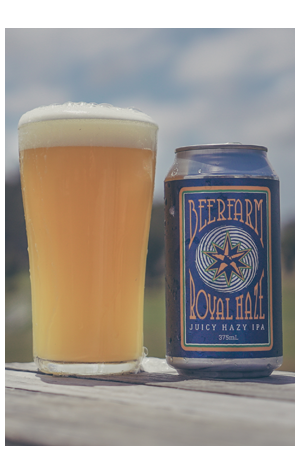 They might be sauntering in late to the party yet the arrival of a hazy IPA from the Beerfarm crew feels like it had to happen. After all, such beers are designed to be easy-going, fun, low in bitterness and fruity as all hell – which is a pretty decent summation of the entire Metricup operation.

With Royal Haze, they might have taken their time, but it means they've been able to put ticks in all the appropriate spots on the hazy IPA checklist, not least the one for haziness: this one's dense as, with a pale golden hue not too far off that of a Bavarian hefeweizen.

As for flavour and aroma, the brewers went heavy on Citra, El Dorado and Mosaic hops, but have done so in a way in which the fruitiness is delivered with a velvety softness. Unlike, say, the punch of Colonial's cracking recent Hazy IPA, Royal Haze brings its goods with a more laid-back vibe; it's all about soft lemon-lime and citrus aromas, with a hint of coconut, a rounded, chalky texture to the palate thanks to the rolled oats, and a bitterness that keeps itself out of the way.