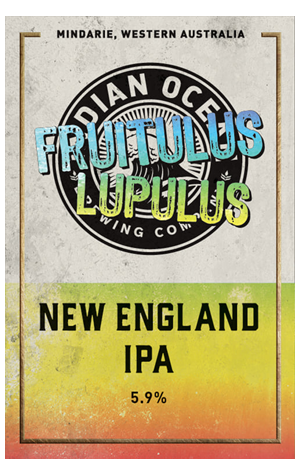 Fruitulus Lupulus arrived in March 2018 amid a flurry of interest from locals in Perth’s northern corridor. This soon spread further afield, going on to record the quickest keg draining at Mane Liquor then featuring in this publication's Best New WA Beers list for that year. Clearly, its deft execution and broad appeal had found many friends.

As 2019 draws to a close, the beer has made the leap to core range under the stewardship of incoming head brewer Thomas Fleay, formerly of Beerlands' Whitfords brewpub, with the new Fruitulus Lupulus arriving post-transition with even more dry-hopping. Tom notes that the challenges of delivering consistent haze at scale and regularity has meant increasing dry-hopping rates and frequency of brews – basically, smaller batches with more hops, more often, after the first core range offering presented with greater clarity than expected.

As a result, the familiar orange and mango juice remain with touches of stone fruit, courtesy of Citra, Vic Secret and Galaxy hops, on a smooth length that’s bereft of bitterness in a lurid, fluffy fog. Haze remedied, the vowel forward beer is now as plump as ever and awaits new fans wherever it pours.