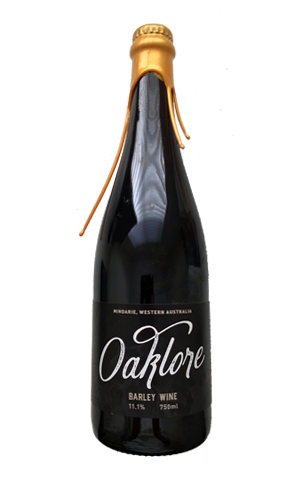 What better way to celebrate the festive season than by using the combined talents of your former colleagues to create a massive barleywine ready to take the edge off a summer heatwave? Having worked with former Temple man Ron Feruglio at Homestead and Joel at The DTC, Indi’s head brewer Jackson Purser knew the group would be just the right mix to create malt driven magic before setting the beer to rest in ex-Heaven Hill bourbon barrels for six months.

The result is an opulent and incredibly well-balanced beer that begins with aromas of plummy fruitcake and torched toffee. The ruby tinged, deep walnut coloured beer then delivers chocolate, raisin, more toffee and fruitcake with barrel vanilla and faint coconut. Oak tannins provide further complexity alongside an integrated alcohol warmth on the smooth, lengthy palate.

It’s an impressive release and a worthy testament to its collaborators.

Oaklore is available in limited, wax dipped 750ml bottles from the brewery and will hit select WA retailers into the New Year.