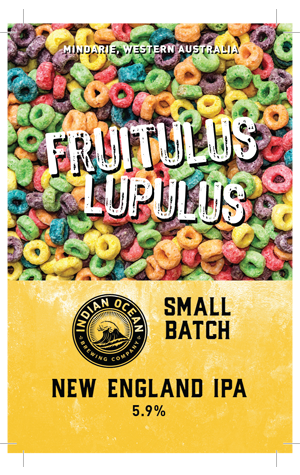 Forty kilometres north of Perth, a hazy mystery has descended on a brewery overlooking the comings and goings at Mindarie Marina. In Hitchcockian style, the first event took place just days into 2018, when a new hazy IPA was released to little fanfare, offering few signs of the tumult to come. The beer's second coming, over the first weekend of March, whipped locals into a zombie like fever, with an astonishing 200 CANimals of the lupulin MacGuffin – four times a typical weekend's CANimal sales of all of the brewery's beers – snapped up.

With few craft outlets to be found in one of Greater Perth’s fastest growing areas, it’s little wonder the opportunity to froth with hazy madness was celebrated with such abandon. Indeed, it seems likely that Indian Ocean brewers Jackson Purser and Brody Watts succumbed to a haze induced, Doctor Seuss fever dream when naming their NEIPA, such is its influence.

In the glass, the plot thickens into a lurid lemon colour, sending aromas and flavours of tangerine, mango and a little passionfruit, driven by Citra, Galaxy and Vic Secret hops, into your olfactory system. Fruitulus Lupulus may have six U's in its name, but it's not an IBU driven beer, with a low 20 International Bitterness Units working in harmony with the beer's full mouthfeel and mild, chalky finish.