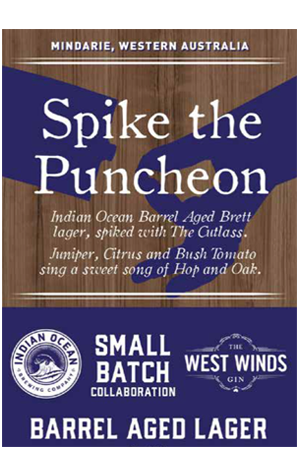 One of the most curious West Australian releases this year may never have occurred. With less than two weeks to go before the Perth Craft Beer Fest, West Winds Gin ambassador Rummy "Gilligan" Lovebeard - possibly not his real name - enquired about a collaboration for the event at the exact moment Indian Ocean head brewer Jackson Purser was checking in the progress of a half-forgotten barrel folly. This was a moment of unusual happenstance.

Twelve months earlier, Jackson had filled a French oak ex-wine barrel with Brett Not Brett New World Sour and another with Indi’s rice-based Street Beer lager. The pronounced tannic development of both required careful blending for balance and colour, resulting in a 30:70 ratio in favour of the lager. Rummy’s contribution involved the liberal "seasoning" of additional juniper and bush tomato with West Wind’s The Cutlass gin, which was left to infuse with the barrel blend.

The intriguing result fills the nose with botanicals, limey citrus and barrel vanilla before a through-the-looking-glass moment in which the heady aromatics dissolve into a balanced yet slightly sweet lager body that quickly turns barrel-and-Brett dry with almost no sweetness to speak of – it’s quite a ride but one that remains eminently drinkable.

As with much of a serendipitous nature, these moments are fleeting. Those that are curious, or indeed curiouser, are well advised to hunt down this rare collab.