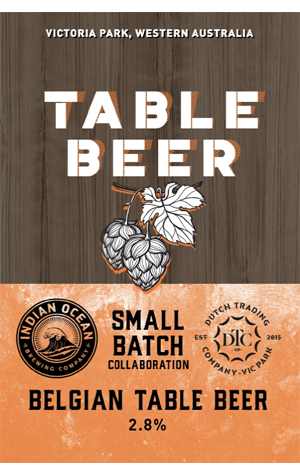 The history of the table beer style (if you can call it such) is more centred on an idea than any tight guidelines. For many years, these low alcohol beers were enjoyed with a meal by adults and children; it wasn’t too long ago in some areas that such drinks were even served in schools. The international renaissance of table beers also seems to be a recognition that you can create interesting and complex beers without being crushed by high alcohol, half a bine of hops or a deluge of adjuncts.

For Indian Ocean Brewing and The Dutch Trading Co, refreshment and responsibility were top of their minds in creating their Table Beer, particularly since The DTC want the beer to be a permanent feature on one of the bar's 27 taps.

In the words of the man who brewed it, Jackson Purser, the beer is like a “mini saison” and, indeed, it offers a mix of yeast-forward flavours. There’s aromas of lychee and pineapple plus a touch of background Brettanomyces funk and a slight lemon-melon character too. Certainly, it's a far cry from the vast majority of light beers populating bars and bottleshops across the country.