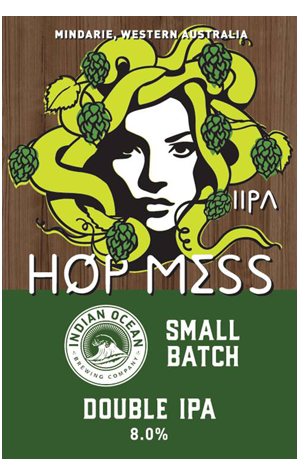 Anyone drinking in Perth at the moment might fear they're about to be consumed by a wave of double IPAs, in this case labelled IIPA. Here, Indian Ocean joins the high ABV swell of contenders with a decidedly old school take and, as they say, “make a solid beer with enough hearty constitution to stand up to truckloads of hops thrown at it”.

It’s an interesting thought that just a decade makes this style of DIPA old school. In 2008, the concept of dry hopping was barely understood or used in Australia, yet in 2018 this expression is almost revivalist.

A classic trio of Columbus, Simcoe and Cascade hops are joined by a little Citra, the only modernity on show here, creating a dank pine-citrus resin character upon a refined caramel malt base that’s far from a Hop Mess at all.

Available from the brewery and select WA venues