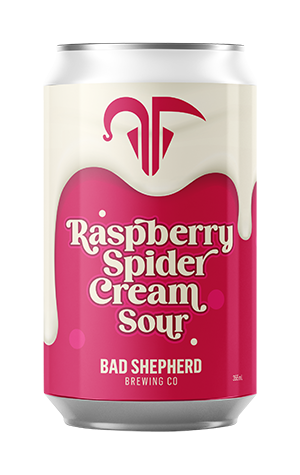 It’s funny how long terms can be in your vocabulary without you really stopping to wonder where they come from. Take a spider: the drink, rather than the creepy-crawly kind. Why does the combination of a soft drink and ice cream get called that in Australia? It turns out Americans call them ice cream floats but here and in New Zealand we’ve gone for a name that feels far less descriptive.

Well, turns out it is a somewhat descriptive term and refers to that wonderful moment when the vanilla ice cream hits the liquid to create an immediately cascading carbonation said to resemble a spider web. It is indeed a beautiful sight but you do wonder if café owners across the country need to see more spider webs...

This linguistics lesson comes courtesy of Bad Shepherd, who have released Raspberry Spider Cream Sour, inspired by said café treat. It pours a striking pink colour that most closely resembles pre-diluted cordial while the raspberry flavour is just as forthright as that hue, and the level of vanilla is quite intense too. Being that it's brewed with oat, wheat and lactose, it's also thick, rich and creamy, leaving any sourness as a far softer presence.