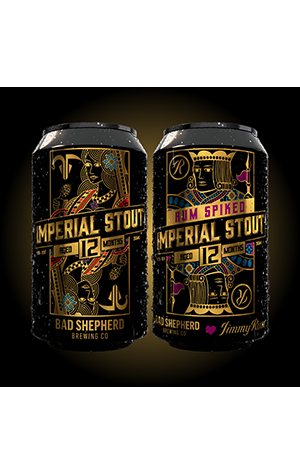 Bad Shepherd don’t tend to let winter pass them by without releasing some weather-ready dark beers and 2022 is no different with the arrival of the Imperial Stout twins. The names might be a little more simple than the Melbourne brewery’s penchant for naming such beers after Russian mythology but the two beers are anything but simple (and hey, Russia’s been in the news a bit lately).

The cans feature a royal pairing of a queen and a king with her majesty, the Imperial Stout having spent a year quietly aging away. It's a way of life that frankly, seems to be the best thing any member of a royal family could do, but personal republicanism aside, the big dark beer flickers between roasted notes, coffee beans, bitter dark chocolate and licorice before sweeter edges of molasses and vanilla appear.

His royal Rum Spiked Imperial Spiked has meanwhile enjoyed a courtship with rum from the Mornington Peninsula’s JimmyRum. The result is a modestly boozier beer (9.6 percent compared with 9.2) that on the palate feels somewhat lighter thanks to a lift from the spirit, while those roasted elements found in the Queen are all amplified and joined by lashings of butterscotch and caramel that bring to mind chocolate fudge.