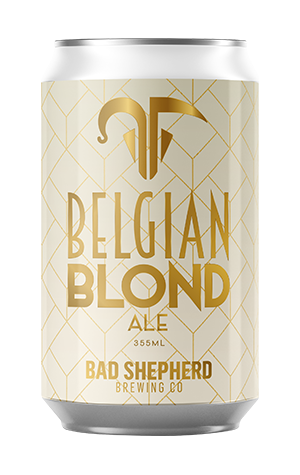 The modern Australian craft beer landscape is one filled with myriad beer styles but, as much as we’re living in a world of unlimited limiteds, there are some styles that seem to miss out. Maybe it’s because we’re all seeking what’s new, with brewers looking to experiment with fresh ingredients and ideas, and craft drinkers looking to hunt down the latest releases. Whatever the reason, it means classic beer styles from some of the great beer-making cultures don’t get made locally so often – and that's particularly true when it comes to certain Belgian beers.

To rectify that matter, a little after many local breweries have been exploring German classics for Oktoberfest, Bad Shepherd have released the quintessentially traditional Belgian Blond.

The golden ale gives a vibrant mix of fruit and herbaceous aromas and flavours that stem from the yeast, and those all sit atop a very thick texture and mouthfeel with a heady carbonation that makes the 6.5 percent ABV beer a meal in itself. There’s also quite a heavy spice and floral element that the Belgian yeast seems to drive in part, which is pushed further by Styrian Golding and Perle hops.

Bad Shepherd have also made full use of their brewpub kitchen here, with their head chef creating a candi syrup which layers on a distinct sweetness and rich flavour, even if that in turn disappears into Blond’s dry finish.