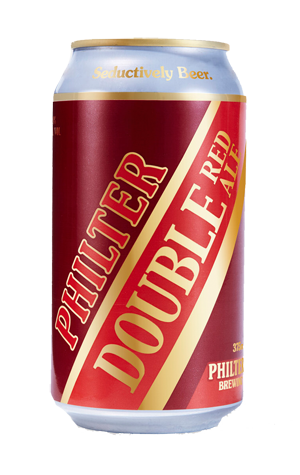 Red IPAs might have mostly fallen by the wayside in craft beer over the last decade, but for whatever reason, double red IPAs remain one of the only original American IPA variants to survive to great IPA hazening of the last four years. Philter’s latest special release is officially labelled a Double Red Ale but I’ll be buggered if I can see how the two styles can be differentiated?

Cast in the precise mould of one of Australia’s original Hype Beers™, Modus Operandi’s Former Tenant, Philter’s Double Red Ale adroitly walks along the razor edge of malt sweetness, hop compounds and bitterness. Too much of anything in a beer like this, and you’re on a one way ticket to "I Wish I Hadn’t Bought A Four-Pack Of These" Town.

It definitely pours like a double red: a gorgeous deep rust colour with powerful aromas of passionfruit, guava and lime zest. And, unless my brain has just started assuming there’s Sabro in every IPA now, I swear there’s a hint of coconut too. The real star of the show, however, is a mouth-coating hop resin of woody pine paired with a mild biscuit malt character. Like any good red IPA, this is a bracingly bitter beer and it works beautifully to offset the malt sweetness and light, clean alcohol.

A skilfully made beer, absolutely worthy of entry into the club of great Australian double red IPAs.