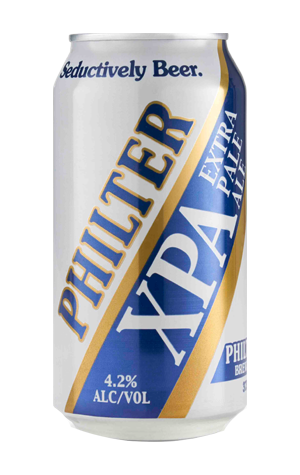 When a new brewery launches, they can only hope their first beer is one that helps them hit the ground running. It has to establish the ethos of the brand and stand out from the rest, both in terms of the quality of the beer and its appearance on the shelf. Safe to say, when Philter XPA launched in early 2017, it met those expectations.

Like most first born children, it’s an overachiever, winning the coveted Champion Pale Ale title at the 2017 Craft Beer Awards at the tender age of four and a half months. It also won the slightly less prestigious trophy for “NASCAR-style trashiest can design,” with seemingly everyone in the craft beer scene holding some sort of opinion on the retro-style packaging.

Yet, whatever the beer may look like on the outside, it’s really what’s on the inside that counts. It lives up to the extra pale characteristic, pouring a slightly cloudy, straw yellow colour. A mix of dry-hopped American and Australian varieties provide tropical flavours and aromas of mango, passionfruit and citrus, while a minimal amount of Australian and American brewing hops result in a low bitterness.

In terms of a style-accurate XPA, it hits the mark. In terms of tasty beer to wash down some pub grub or a snag wrapped in white bread, well, it almost seems this beer was designed for just that.