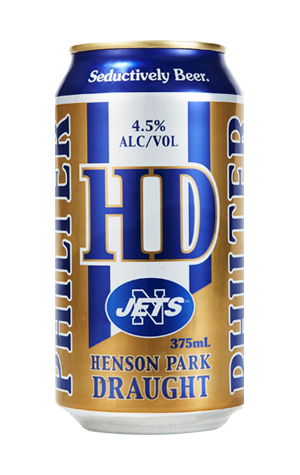 When you think of beer at the footy you don't tend to associate it with the types of beer typically featured on The Crafty Pint. Personally, the term "footy beer" reminds me of tastes that are flat and soapy, often mid-strength and nearly always in a plastic cup. I'm not a snob, however. I know there is a time and place for footy beer but can a beer still be crafty if it's made for gulping at the footy? Luckily, Philter have answered the question with a frothy "Yes!"

Henson Park Draught sees the Marrickville brewers team up with their local rugby league team the Newtown Jets, coming together in a beer named for the team's iconic home ground (and equally iconic pub). Of course, the Jets have not played first grade rugby league since 1983 yet they still have a fierce following amongst locals who have kept the royal blue alive and retro jerseys selling en masse. When you take that into consideration, it was always just a matter of time before Philter approached them about making a beer (how very Marrickville).

According to the brewery crew, the Jets wanted the beer to be something easy to drink. It's also easy on the eyes when presented in a cool Henson schooner with a 'stache-making head and familiar straw colour that says: "Drink me, you're thirsty." The initial taste is sweet with an almost maple like tang that's washed away with a hoppy wetness. What's left behind is a slight but pleasantly complex wheaty flavour that hangs ever so slightly in the throat and probably makes for the most amazing burps. I found this to be the same no matter what sized gulp I took.

At least that's what my crafty boy mouth detected. I think my girlfriend summed it up the best when she said: "I like it. What more do you want me to say? It's a good beer, you drink it."