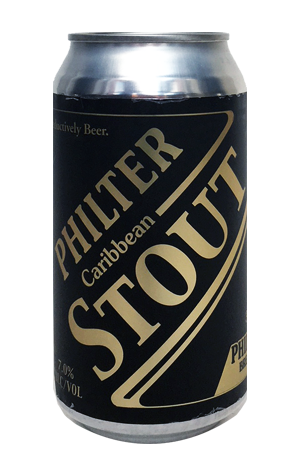 If you'd drawn one conclusion from the first 12 months of Philter, the Sydney based brewing company that snaffled a trophy for its XPA within months of launching, it's that here was an operation with a penchant for creating flavoursome beers in tight, approachable packets. (Alternatively, you might have looked at the cans and assumed they were NASCAR-following, Stuyvies-smoking bogans who just happened to love craft beer.) So the choice of beer to mark their first anniversary may have come as something of a surprise: a Caribbean Stout, weighing in at no less than 7 percent ABV. However, what was intended as a short keg run proved a hit so it's now out more widely in cans.

So, what is a Caribbean Stout? Well, it's not something that's been aged on rum or Tia Maria soaked oak; instead, it's a nod to the bigger, heavier, fruitier stouts that proved popular in places like the Caribbean, parts of Africa, India and Sri Lanka during the height (or nadir, depending on your perspective) of the British Empire when dark beers were far more popular than they are today. You could easily tag it a foreign export stout.

Of more importance is what it's actually like. In short, it's little surprise there was a clamour for more. It's a fruity affair, not in the hop bomb sense, but one awash with dates and raisins, tucked in alongside heaps of chocolate and a touch of nuttiness, before a slightly dry and dusty dark chocolate bitterness creeps in to keep the sweeter side in check. Don't be surprised if it becomes a wintry regular.