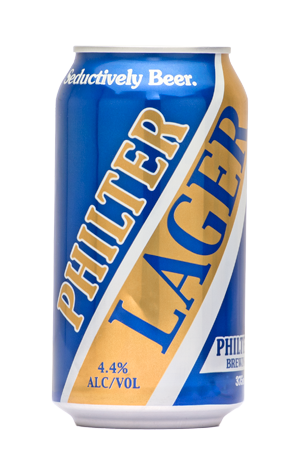 Before the launch of Philter’s third beer, the rumour around town was that this was going to be a “classic Aussie” kind of beer. The previous two can designs featured bands of blue and gold, then red and gold, so it seemed almost a given that this was going to be green and gold. What could be more Aussie than that? Instead, it was a totally new colour scheme, as if someone had put the XPA through the “inverse colour” option on MS Paint, featuring a thick gold band and a dark blue colour scheme, as opposed to the usual white. [And looking rather reminiscent of the "Australian lager" popular overseas that no Aussie actually drinks, perhaps – Editor]

The beer inside came as almost as much as a surprise. These days, IPAs seem to feature among the early releases from a brewery, but instead Philter had opted for what can be one of the most time consuming and challenging beers to brew well – a lager.

Clean, crisp and easy-drinking, it ticks all the typical lager boxes. Then, there’s a little bit of excitement added – a darker than usual golden hue, a bit of bitterness and flavours that are floral, a little fruity and spicy too. The lager yeast is also a prominent flavour, offering a hint of sweetness and a dry finish.

It’s a beer that bridges the gap between craft aficionado and VB drinking Dad, because while its beauty lies hidden beneath its simplicity, it’s that simplicity that makes it beautiful.