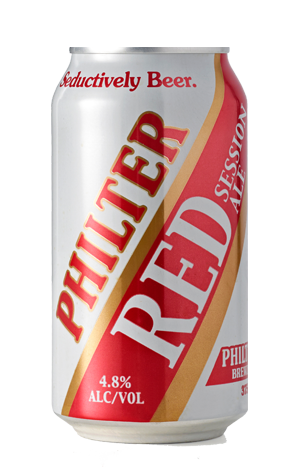 The second beer to be released as part of Philter’s core range arrived just in time for winter 2017 and came in the form of a red ale. Although nothing could top the success of the XPA, the first batch of Red still managed to score two silvers at the same awards at which its older sibling took out Champion Pale Ale.

The copper-hued Red displays its sessionability with just the right amount of crystal malt character. There’s enough to give it a bready profile – even touch of berry that lingers on the palate, but not too much to make it overly malty or sweet. The hops, which include Topaz and Mosaic, offer a subdued earthy and spicy flavour, while some tropical flavours that featured in the XPA remain.

For a brand that’s built on sessionability, the choice of a typically punchier red ale is an interesting choice. But, if anything, pulling it off is really what pays testament to the skill of the brewer.