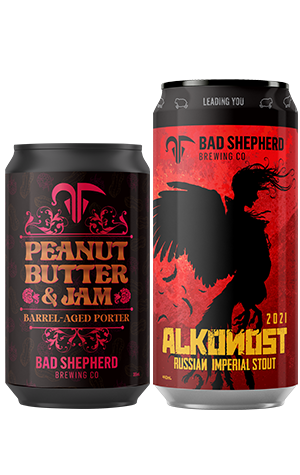 Melbourne’s Bad Shepherd are on a dark beer train at the moment, releasing three at once. One is the returning Double Choc Hazelnut Brown, which you can read about here and managed to pick up a gold medal at the most recent Australian International Beer Awards (AIBA). Then there’s the return of the kind of barrel-aged beer you tend not to see all that often (or ever): one inspired by a sandwich. An American sandwich to be exact, given it’s a Peanut Butter & Jam Barrel-Aged Porter. It sold out when it was first brewed, is already gone from the brewery's online store at the time of writing and the beer that has some history too, with Bad Shepherd having first brewed Peanut Butter Porter as part of their Brew Crew series midway through 2019. Here they’ve taken that beer, loaded it with raspberries and given it time in barrels for results where those potentially disjointed elements are quite impressively melded together. I'll be honest here and say I've always found the idea of a PB&J sandwich a little disturbing but here in a beer, they are there in just the right quantity and work better on a base of chocolate malts than one of bread. Raspberry jam come through first but they are soon joined by a soft and underlying nutty element that doesn’t quite stand out like it does in the Peanut Butter Porter but gently offers a sharp response to the beer’s incredibly creamy mouthfeel.

Next up is Alkonost, a Russian imperial stout that was first released in 2019 and was barrel aged in six different barrels to become [six separate beers in 2020]. Given Victorians are back to not being allowed visitors over and given I’m the only Crafty writer in Melbourne for the moment, personally, I’m a little thankful there aren’t six different nearly 10 percent beers I need to drink in one night. Named for the mythical Russian creature that’s meant to make you forget yourself, there’s a lot to get lost in in the intense return of Alkonost. With a velvety mix of roasted coffee, incredibly dark chocolate (think well over 95 percent), berries and a cola-type flavour but with none of the attached sweetness, the imperial stout is again a beer to sit on or share around. As unfortunate as it is that sharing might be a little hard right now, my can still manages to disappear quickly.