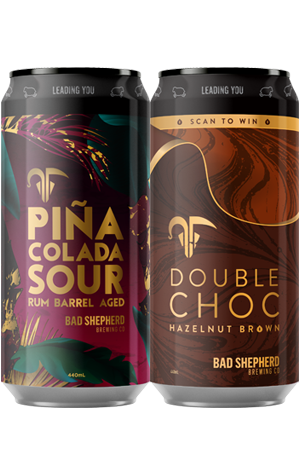 When Bad Shepherd's Piña Colada Sour appeared back in September, we noted it was low on the sour and heavy on the pineapple juice and coconut. So what happens when you take such a beer and pop it in former rum barrels for six months?

In this case, as well as almost doubling in ABV, Rum Barrel-Aged Piña Colada Sour has pretty much shed the last vestiges of sourness and is certainly more rum barrel than piña colada. There's sweet, honeyed, banana-tinged rum on nose and plenty of sweet rum and toffee to taste, with the added six months of age presumably aiding the caramelisation of the base beer too.

Following fast in its footsteps is the returning Double Choc Hazelnut Brown, the souped up version of the beer that quickly became a cult favourite at Bad Shepherd when they launched: their Hazelnut Brown. It says much about the changes of the past half decade that such a beer is relatively normal now – even compared to its companion here. As in previous years, it serves up plenty of chocolate, a touch of sweet coffee, a swirl of Nutella, and richness aplenty – suited to the Magnum wrapper-esque new labels. It's one that's proved to be popular too, not just among the brewery's fans but beer judges too, with it being awarded two gold medals - one for draught and one for the packaged version - at the 2021 Australian International Beer Awards.