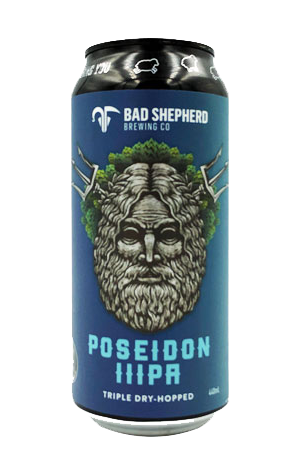 The Almighty has long been one of Bad Shepherd's most sought after and top notch releases, a bold yet balanced double IPA bearing a hoppy, bearded god figure on the cans. But now it turns out there's someone more almighty than The Almighty as Poseidon, a triple IPA, makes his way from the brewery – all 10 percent ABV of him – after proving popular as a single keg trial at a past event.

There's a danger with such high octane beers, particularly where the brewers look to keep the malt character lean, that the fruitier, more aromatic side of the hops can be lost amid the strident booze, but Poseidon carries his hoppiness well. It's as if someone's brought a pineapple-heavy tropical fruit punch along to the party and is hoping they've judged the amount of vodka in there just right so people still get a hit but not a boozy one to the olfactory system.

Lean, tight and dry on the palate, like its little brother, and surprisingly low in perceived bitterness, watch out as, like the ship in The Poseidon Adventure, it's likely to take you down...