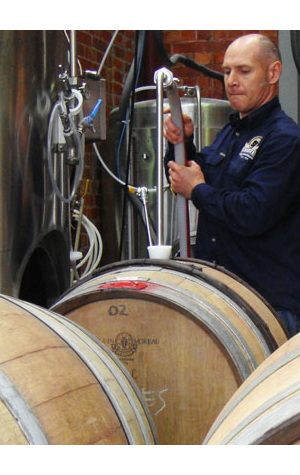 If ever you were after proof that you an teach an old bull new tricks look no further than Holgate Brewhouse. Now in its 16th year as a brewery, it has grand plans for further expansion and continues to explore new avenues with its beers while improving its old ones. In the former category beer wise is a delve into the world of sour and farmhouse beers. On a trip to the USA last year, brewery founder Paul Holgate called in to Russian River to learn from the best on how to manage regular and sour yeasts through the same brewhouse and the results should be seen more frequently in 2015.

Some may recall the barrel-aged dark sour, Midnight Cowboy, that debuted at the 2014 GABS; well, it is pretty much the harbinger of what's to come, with Paul telling us: "We still have some barrels kept back ageing and we are doing more this summer." In the meantime, they've just put out a Berliner Weisse called Hop Tart which debuted at The Alehouse Project on New Year's Eve but will be hitting a few more venues over the coming weeks. According to Paul: "It’s a real ripper."

UPDATE!! Turns out it's not a Berliner Weisse as such, with the brewers apparently reprimanding Paul for telling us it was. It did start with a sour mash (like a Berliner Weisse) but then was taken in a different direction. Namely, they used Lactobacillus, bacteria from the same friendly family that turns milk into yoghurt, to naturally sour the wort before the boil by adding a little malt along with its indigenous population of microorganisms. They then decided to take a New World approach and marry citrusy hops to the lemony lactic tang.

The result, according to the brewers is "a zesty aroma of citrus and bright tropical fruits" and a flavour that "awakens the palate with a surprising hit of sourness that blends beautifully with the lemony hop character." Sour, dry and refreshing, they say, and "a true new world beer, not bound by style but led by the brewers fancy for a quenching summer ale."