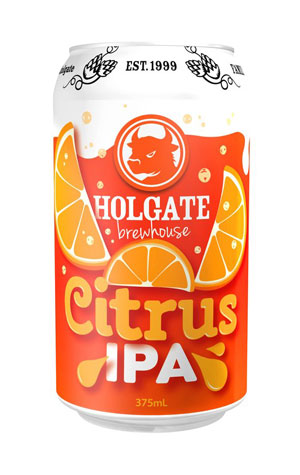 One of the beers that inspired Paul Holgate to start brewing commercially at the end of the last millennium was Hoegaarden. He'd enjoy the witbier while on work trips to Europe and later introduced his own take on the style, White Ale, to the Holgate lineup. His passion for such beers extends to German wheat beer styles too; head to their Woodend HQ and at any time of year you might find three different European wheat beers on tap – this despite the fact the country's drinkers have shown little desire to embrace such beers en masse, at least since the earlier years of Matilda Bay's Redback.

It's a passion that seemingly remains undimmed – one has to assume Paul is part of the "hefeweizen as OG hazy" brigade – and here appears to have taken on an element of subterfuge. Certainly, as I tucked into a can of Citrus IPA the question in my head was: "What citrus fruit have they used to enliven the beer?" And the initial answer was that there was something orangey in its midst, as if fresh orange flesh had been added to the brew (it's dried Murray River orange peel enhanced by Mandarina Bavaria and Kohatu hops).

...and the mental Rolodex of citrus fruits started spinning like an out of control turbine: "What citrus have they added to give it those flavours?" Stumped, I read the label; turns out this dyed-in-the-wool wheat beer lover wouldn’t let it lie: the beer has been fermented with a witbier yeast. Such yeasts can contribute citrusy characters although here jt's more their softening, clovey, white-peppery nature that comes through on the pillowy palate. It leaves you with a white IPA as much as a citrus IPA – something that's are a rarity in Australia – so if you’re craving a Belgian-esque experience in this era of American-influenced IPAs here's your chance.