Matt Moore and wife Gemma Sampson had long thought about opening a brewery – four years to be exact. And, while pondering the possibilities surrounding their urban brewery’s location, serenity struck.

What had been an area for blue collar workers and migrant living had flourished into an orderly extension of the Perth CBD, where refurbished warehouses – some well over a hundred years old – now rubbed shoulders with modern apartment living and office spaces filled with consultancies and design agencies.

Prior to gentrification, those warehouses had been home to parties at which electronic music, hip hop and graffiti took centre stage. Although long gone, memories of youthful bacchanalia lived on in Matt's mind as he set about changing direction himself, with the appeal of a day job running a construction materials laboratory and later as a civil construction quality assessor beginning to wear thin as the brewing dream blossomed.

With those pieces in place, it was time to open Bright Tank Brewing Co, which saw a former fashion warehouse reincarnated as a 130-person venue featuring a level of design beyond that found in most breweries; hang a curtain across the brewing tanks and you’d think that you were in a cool restaurant.

While retaining the urban aesthetic of its surrounds, the use of aquamarine blue and vibrant yellow highlights throughout provides modernity and subtle cohesion, offset by the use of reclaimed bricks and new tiling. Referencing Matt’s love of graffiti – and the parties of the past – a large-scale stylised portrait of the father of fermentation, Louis Pasteur, oversees proceedings at the long, shared tables that sit alongside a three-vessel, 10 hectolitre Spark brewing system.

The bar area’s ten-tap tiled wall pours what Matt describes as a "flexible" amount of his core range of six beers. Depending what collaborations are current, punters may be faced with six collabs and two core range beers and, in a similar vein, fellow WA brewers Artisan and Rocky Ridge share a tap.

Showing a high level of care and respect for beer, filtered water is used to clean glassware prior to pouring, while glassware itself comes in a variety of sizes and styles to suit the beers (and are available to take home along with growlers and squealers). Also available for takeaway are four-packs and cubes of the latest offerings.

Matt and Gemma are keen foodies too – their honeymoon was essentially a tour of as many three Michelin star restaurants in France as one can possibly squeeze into a single trip – and the menu sits beyond a brewpub's typical burger and pizza offerings. It's designed to celebrate the Bright Tank beers in the same way many European cultures put beer on the dining table rather than treat the two sides of the business separately.

Indeed, such was their eagerness to create a holistic experience that their head chef's interview involved being presented with a clutch of beers that represented future Bright Tank offerings and being told the owners would be round to his for dinner the following Friday night.

However, despite all of the clever design, sharp modern food and respect for the urban environment, Matt is keen to remind punters that Bright Tank is first and foremost a brewery: a little pocket of urban Perth that welcomes everyone from hardened beer nerds to foodies to those wanting a few beers before the game at nearby Optus Stadium.

Any time during opening hours Smalley by name but not in presence. In some ways, its personality is that of the brewery where a safe option would be to produce an approachable, low ABV beer to support responsibly-minded punters. However, Bright Tank’s love of hops quickly quashes that idea. Instead, Smalley is a bold statement for its stature yet one which retains drinkability – it is, after all, a session beer despite generous Amarillo and Simcoe dry-hopping. Biscuity malts brings balance and a larger mouthfeel to the lower… Read more
Golden Yellow Quite a tongue twister to wrap your lips around when ordering, Strange Stange is a German kolsch-style ale that’s become a gateway for many drinkers. The name refers to the tall, slender stange glass that such beers are traditionally served in around kolsch's spiritual home of Cologne. Bright Tank’s iteration is hardly strange at all. The sweet cereal malt, light citrus (achieved via noble hops) and clean length are aptly redolent of its Germanic origins. Perhaps the presumed oddity is when… Read more
Pale Yellow 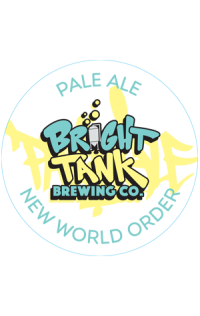 New World Order rides upon the third wave of craft beer and delivers a modern, fruit forward pale ale. Indeed, Matt Moore suggests that this evolutionary aspect of the industry appears through the mercurial nature of the appropriately named Enigma hops, which seem to shift the profile of the beer over time along with a little help from Galaxy. Youthful examples show a pine character that shifts to a full-blown fruity affair of ripe mango, paw paw and sweet orange once the beer has a couple of weeks… Read more
Golden Yellow 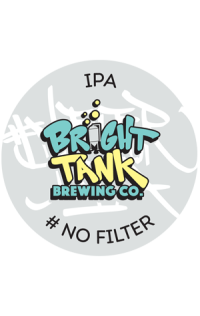 Social media’s appropriation of the term "no filter" as a means of implying authenticity may have tenuous parallels to the brewing world, however, as the style trends of the past couple of years have shown, not filtering may actually, oxymoronically, create greater clarity of expression. In Bright Tank's case, it’s a love of hop character and drier West Coast IPA variants that sees a slightly hazier shift to allow as much aroma, flavour and bitterness as possible. It’s as if an American… Read more
Golden Sometimes there’s no avoiding the obvious. If you open a brewery on Brown Street you kinda have to have a Brown Ale. It's no bad thing as, for all of the experimentation innate in modern brewing, there is something satisfying and dependable about the style that’s as enduring as the century old bricks that line the warehouses just outside Bright Tank's doors. In the glass, the straightforward articulation conveys caramel, coffee and lightly roasted malt, all of which rise with the mid-palate… Read more
Dark Brown As new head brewer Jackson Purser finds his feet at Bright Tank following his move south from Indian Ocean, the brewery’s toys have started to come into play. The reverse osmosis unit has quickly become a favourite for dialling in exact water profiles to best express each style. And in the case of Dank Tank, part of its dry appeal can be attributed to water chemistry, which may not be super interesting for most drinkers but is when it comes to delivering the beer's very tight outcome, something… Read more
Golden Available in limited release from the brewery and WA stockists Bright Tank’s zeitgeist dabbling continues to see the urban brewery move further away from owner Matt Moore’s beloved saisons. Here the East Perth operation have partnered with the brew on premise, craft home brew team Brew U. With commercial brewing aspirations themselves, Snob Bait’s concept was built around an old school lime ice cream in honour of the ascendant amateur John Stocky’s birthday, while the name is a pithy play on – and at – a WA based beer group. As Matt says, laughing:… Read more
Golden

Available from the brewery and select WA retailers April has been a busy month for Bright Tank with cans flying out of the East Perth brewery at a rate of knots. Among them is the Assalted Passionfruit Gose, brewed in collaboration with Rocky Ridge (well, there is a y in the day) and featuring fresh passionfruit purée in the fermenter and a healthy dose of black Himalayan salt to boot. As you'd expect, the beer is a thirst-quencher ideal for warmer weather – so it's lucky Perth is experiencing a later winter this year – in which salty and sour… Read more
Golden Yellow As the eagle-eyed among you may already have deduced, this canned release from Perth's Bright Tank Brewing is a hybrid. And what makes it so? Well, they've taken the sort of malt and hop bill that would typically be used in an IPA then cold fermented it with a lager rather than ale yeast to create the sort of finish you'd expect from a lager. It is a style that is very much open for experimentation and open to interpretation too. For this creation, brewery co-founder Matt Moore decided to showcase… Read more
Golden Yellow In contrast to the Michelin star stylings of the brewery’s home, there is one thing that’s becoming very clear about Bright Tanks beer release program: Matty Moore like hip hop. A lot. Mos Def featured on the first can release and, for the brewery’s third, Wu-Tang Clan’s Ghostface Killah gets some affection as well as the noting the beer style’s chalk-like mouthfeel. In terms of its haze, Chalkface leans more misty IPA than juicy NEIPA. El Dorado and Galaxy hops drive proceedings with… Read more
Golden Yellow While Stoned Brut IPA’s equivoque plays out on the can art, the “let’s put everything that’s happening in brewing right now into one beer” sensibility resides within. This zeitgeist-pilfering limited release plays with kettle souring, fruit puree adjuncts, New World dry-hopping and 2018’s ascendant IPA style. Heck, this only needs a vial of kveik, another of London Fog III and some lactose to summarise modern brewing at the tail end of the twenty-teens. Apparently, this is what we asked… Read more
Golden Yellow Matt Moore is in a happy place. Not only does Hitchhiker represent the debut canned release from the East Perth brewery, it also seamlessly weaves together his love of hip hop (check Mos Def on the label), Douglas Adams' classic novel and beer from his own brewery. It’s a quartet that may well contain the answers to the universe but for many it’s more likely to be an enjoyable session beer. True to its name, Galaxy hops ring clearly throughout, most notably in the passionfruit and pineapple… Read more
Golden Yellow