Beer Hop Nation Weekend Getaway & Head In The Clouds, Feet In The Crowds 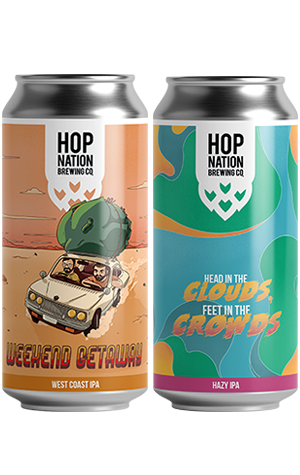 If you ever wondered what Hop Nation’s founders, Sam and Dunc, might look like as Cheek and Chong-style cartoons, then wonder no more. Weekend Getaway features the brewery owners hightailing it through the desert with one impressive hop cone. But referencing an old school American comedy duo isn’t the only way this beer is a throwback, with the dank West Coast loaded with the all-American mix of Simcoe, Columbus, plus Citra and Centennial in the shape of Cyro. The result is a super resinous affair with heavy hits of pithy grapefruit and lime, while the malts bring in a chewy backbone before a big bitterness makes everything else disappear in a puff of smoke.

But when your name begins with hop, why release one IPA when you can release two? Head In The Clouds, Feet In The Crowds doesn’t just borrow from a glam rock classic but is a heavily hopped hazy brewed with Azacca Cryo, El Dorado Cryo, Talus and Nelson Sauvin. Apart from going heavy on the hops, you won’t find much in common with Weekend Getaway here, with the flavours instead being juicy to the point of nectar. Among that melange is nectarine, apricot, guava and pineapple, while a touch of sweetness floats into the beer’s slick and smooth mouthfeel.