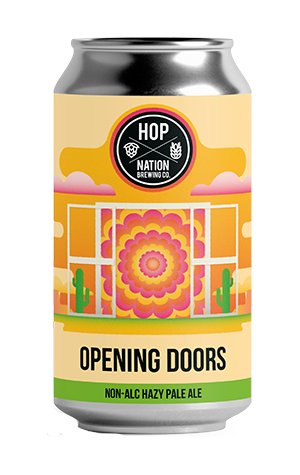 There is a sense of inevitability about Hop Nation’s Opening Doors. The Melbourne brewery were one of the first to jump on the haze craze and have built a reputation for their heavily hopped and lush beers. More recently they’ve also embraced non-alc craft beer† and have found not only fans through it but golden glory too, after securing an AIBA gold medal for their Mind Your Head XPA earlier in the year.

It’s from those two camps that Opening Doors emerges, with the alcohol-free hazy pale featuring Cryo Citra and Sabro hops and T90 Mosaic pellets. If you’re familiar with Hop Nation’s hazies, you’ll find a mix of much of what you love here with a prominent display of stone fruit, citrus and pine. The addition of oat and wheat ensures it's quite a rich and smooth ride, which works wonders to ensure Opening Doors is able to help open minds about whether alcohol-free hazy pales can work.

If you're looking for a boozeless beer with tang, the brewery's No Fool raspberry sour has returned too.

†Come to think of it, there aren't too many style Hop Nation don't explore...