Beer Hop Nation Get The Gist 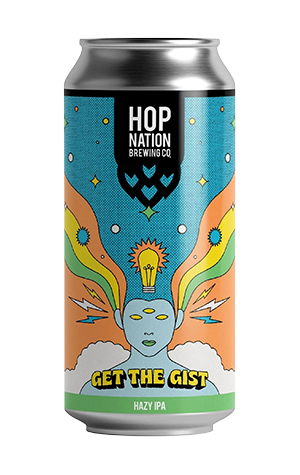 Hazy IPAs are a well Hop Nation have regularly drawn beers from, and while there aren't really beer styles they don't explore, you can generally assume that if you haven't seen a new hazy from the brewery in a while, one will soon be on its way. Get The Gist takes a lot of what they love about such beers, namely a mix of modern hops and hop products, to deliver a lush, smooth and silky ride.

Here the combination is one of Citra Cryo, Idaho 7 Cryo, Sabro Cryo and Motueka T90 pellets from New Zealand’s Freestyle Hops. The aromas are mostly of pineapple and passionfruit, and while those tropical fruits carry through strongly on the flavour, accompanying them is both honeydew melon and a piney finish. Given the IPA is juicy, fruity and very low on bitterness, if you're the sort who's always seeking out Hop Nation hazies, you probably get the gist.