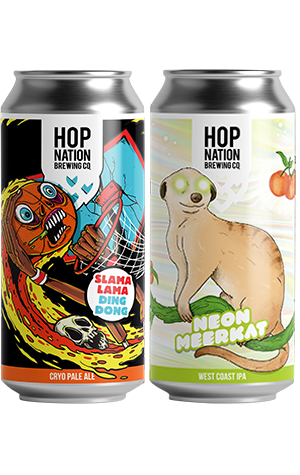 Hop Nation have been living up to their name with these two hop-forward releases, which also sees the Melbourne brewery collaborate with different parts of the beer industry. There is the wonderfully named Slama Lama Ding Dong made with two of the finest arcade machine-filled craft beer venues in all the land, Sydney’s 1989 Arcade Bar and Brisbane’s Netherworld. Slama is a pale ale stacked with new season hops from America, with Simcoe Cryo, Citra Cryo and Cryo Pop all on show. It makes for a hazy, soft and quite luscious beer that's balanced and sessionable while also being filled with quite intense waves of nectarine, grapefruit and dank pine. In other words: find your nearest way to play NBA Jam, crack open a can, pour it into a large glass and watch your rival team wilt under your skill.

Also fresh from the Melbourne brewery is Neon Meerkat, a West Coast IPA brewed in collaboration with the ingredients suppliers at Bintani and a showcase of Nectaron hop from New Zealand. You likely already tried it if you made it to Fixation’s Resinfest and if you did, you would have been met with an intense display of melon, nectarine and pineapple with a substantial bitterness.

Speaking of collaborations, Hop Nation have again teamed up with some of their beer buddies to bring us Communtinnies. This time around each brewery is from Victoria and money is being raised for flood relief and you can grab one here.