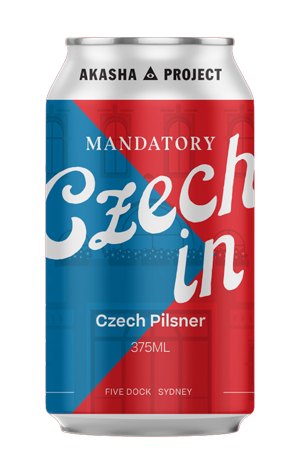 An elegant beer name is a wonderful thing. Granted the best are almost always puns and puns are, on the most part, abominable. But every now and then, it just works. Akasha’s newest project release, Mandatory Czech In, is just such a name.

Every single pale lager in the world can pretty much trace its lineage back to the Czech or Bohemian pilsner. First brewed in the 1840s in Pilsen, the pilsner was a combination of extra pale Moravian malt, locally grown Saaz hops, soft Pilsen water and a Bavarian lager yeast expertly handled by Bavarian Josef Groll. The arrival of this pale, clear and refreshing beer coincided with recent innovations in the production of inexpensive glassware and, within years, sparkling glasses of pale lager were being enjoyed throughout Europe and, eventually, the world.

Mandatory Czech In pours a very pale yellow with just the slightest haze; first impressions are of fresh white bread and a spicy floral hop aroma. Can I just say that for people like me who never really had the opportunity to drink fresh European style lagers, the thing that really stands out to me is the hop profile. As I’ve learned over the last couple of years with the growing popularity of local examples, the spicy, earthy and floral character brought by hops like Saaz is a revelation.

The malt feels quite restrained for a Bohemian pilsner but there is the familiar hint of honeyed malt sweetness and an upfront bitter bite that practically forces you to continue drinking. If anyone was still in any doubt as to whether the modern lager revolution was in full swing, the words “Akasha Czech pilsner” should probably just about put that to bed.