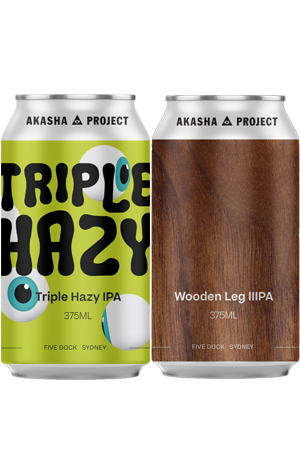 No messing from Akasha as they turned six (even if things could get messy in the wrong hands). Not just one limited release, but two – one making its debut, the other making one of its occasional comebacks.

The new beer is Triple Hazy, which is, um, a triple hazy IPA that comes across like a fruit forward IPA reduction, with a glowing yellow hue that seems to possess a little of the label's lurid green (maybe a trick of the mind). The hop character – with limey citrus to the fore – is most apparent to taste, with the beer's relative viscosity and the boozy warmth amid its lingering, light sweetness indicators of its 10 percent ABV heft.

Wooden Leg is another triple IPA, one we first wrote about back in 2017, that's of a more traditional bent. A familiar pine-citrus US hop character (derived from Simcoe, Amarillo and the brewer's favourite Centennial), sits alongside a solid caramel malt base and a measured bitterness, an approach that, for my palate at least, is better suited to IPAs of double digit booze content.