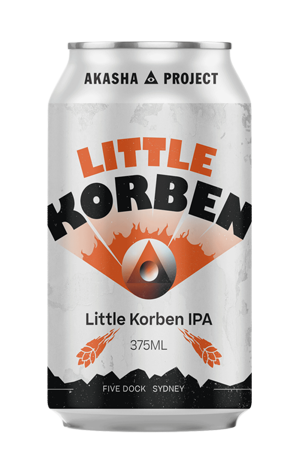 "Oh, have a look at the little bloke! Bless his little cotton socks, he’s adorable. Now, I thought he was supposed to be bigger?"

"No, no, mate – this one’s a new species or something. It’s what they call a Little Korben."

"A Little Korben, they reckon? You wouldn’t bloody read about it!"

Akasha’s latest Project release is Little Korben: a dramatically pared down version of their flagship double IPA. This diminutive, little West Coast IPA weighs in at an almost microscopic 6 percent ABV so it’s practically a soft drink, really. Presumably the hop bill is similar to the big boy given the powerful aromas of mango, passionfruit, pineapple, pine and a sprinkling fairy floss.

On the palate is orange juice, earthy pine and a lower than expected upfront, bitter bite. It does loiter around throughout, however. I’ve absolutely run out of different ways to describe the distinct way Akasha utilise malt in their IPAs so I guess I might as well cut the bullshit and just say the malt exists purely to carry the hop compounds and provide the alcohol. There’s just enough there to ensure the beer is balanced and not a single smidge more. That leaves this tiny iteration of Korben dry, clean and furiously drinkable.