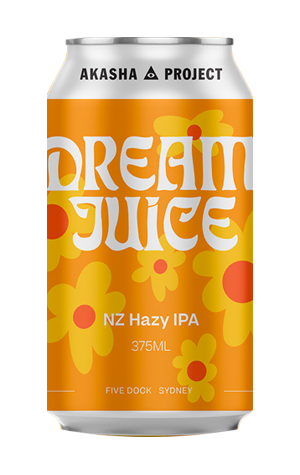 It’s been just over a year since Sydney’s Akasha Brewing Co completed a total rebrand, and their Akasha Projects series of special releases shows no sign of abating. At the time I stupidly thought to myself, there’s no way they’re going to be able to come up with a new hop-focused beer every fortnight or so to keep this thing going. I mean, how many different kinds of IPA are there? The answer, of course, is: "Heaps".

This Project release is Dream Juice NZ Hazy IPA. By my calculations, this is the first time Akasha have released an IPA without a single US or Australian hop variety. Madness! Instead of Mosaic or Galaxy, Dream Juice has had its proverbial chilly bin rammed to the gills full of Riwaka and Kohatu.

I’m sure any commentary about Dream Juice will likely mention that this hazy IPA isn’t particularly hazy but, honestly, who gives a shit anymore? It pours a very light, opaque straw with a rapidly receding head. It’s an onslaught of classic Kiwi hops with intense white grape, grapefruit, pineapple, lime zest and elderflower on the nose and palate. The mouthfeel is as soft and mildly sweet as advertised but with virtually zero discernible bitterness on the backend, it’s a subtle but substantially different IPA to most of Akasha’s back catalogue.