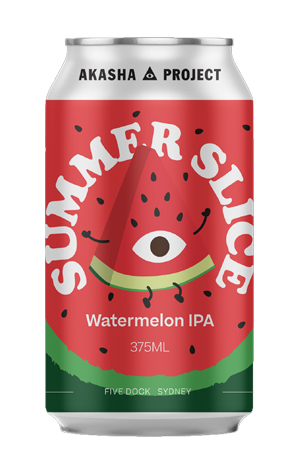 If I’m going to be honest, should I never drink another fruited kettle sour again, I don’t think my life would be any worse off. There was a period there six or seven years ago where I couldn’t get enough. But I think eventually I worked out that using fruit in beer can be wonderful, but the base beer itself has got to have something else going on in the first place.

The reason you don’t see any straight-up, unadulterated kettle soured Berliner weisse around is because it’s just lactic sourness and a faint undertone of wheat malt. Absolutely nothing doing there. But, as beers like Grifter’s Serpent’s Kiss have shown, whack some watermelon into a nice, refreshing pilsner and, in the immortal words of Carl Weathers: “Baby, you got a stew goin’.”

Which brings us to Akasha’s latest Project release, Summer Slice. Take a classic Akasha West Coast IPA, hop it with Eclipse and bung in a load of watermelon... what could possibly go wrong? Not a lot as it turns out. Watermelon rind and mandarin oil on the nose, juicy watermelon lolly character and bright citrus on the palate with zero malt sweetness. Refreshing West Coast bitterness and bone dry finish.

At 6 percent ABV, it’s on the lower end for the style but it’s nicely balanced and, like any good fruited beer, more than the sum of its parts.