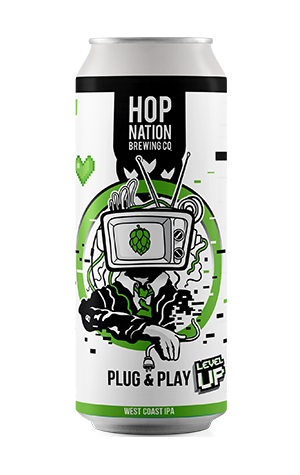 On a personal level, a minor but consistently annoying part of the pandemic still being around is that every time you have to cancel socialising plans, you remember how close you were to buying a Nintendo Switch in March 2020 as a way to help pass away the hours. Given the amount of time that's since gone by, you could have plugged in and played enough of some games that you might rival your skills from those times a school holiday could disappear in an instant thanks to 64 and a TV with bunny ears.

Embarking on something of a replay themselves are Hop Nation, with the Melbourne brewery revisiting their Plug & Play – a West Coast IPA that appeared in Hop Products Australia and Beer Cartel's LUPOMAX packs in November and featured Amarillo, Callista and Huell Melon in concentrated hop pellet form.

Plug & Play Level Up has the same ABV of 6.0 percent as the original but contains a new hop combination of LUPOMAX Mosaic with Strata and Chinook with the aim to create a far danker sequel. It means you’ll find quite pungent aromas and flavours of fresh pine alongside floral notes and citrus in the shape of candied orange, while a fairly lean and dry finish and a big, biting bitterness means that, if you like your IPAs bold, it's a beer you can return to it again and again until you too level up.