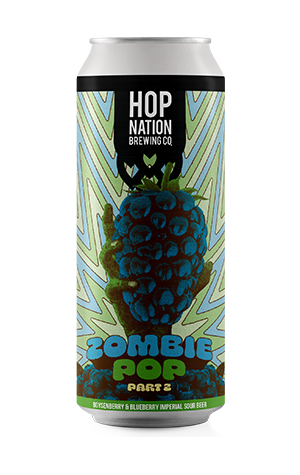 Back in October, Hop Nation were preparing for the apocalypse with Zombie Pop, an imperial sour filled with raspberries that arrived at a very fitting time given COVID case numbers in Victoria were shooting for the stars and Melbourne had just experienced an earthquake. Now in December, those numbers seem to be back shooting up and … look it doesn’t even seem right to write that there isn’t an earthquake when doing so feels like it will cause one to appear before this sentence is out. Mind your head!

Like almost all horror flicks, it's a beer that's been given a sequel in Zombie Pop Part 2, which this time around is filled with boysenberries and blueberries. The crimson-purple beer first awakens with a smooth sweetness and touch of vanilla, while the two berries are in there in droves, providing further rich fruits and aiding the beer's sourness from the lactobacillus culture and making this member of the walking dead akin to a fruit smoothie or particularly tart bit of pie. Given how many successor films zombie movies can create, we await to see if another Zombie Pop will one day rise up.