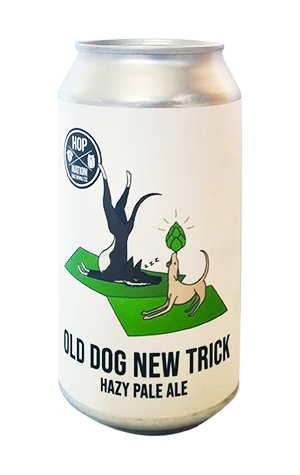 Common sayings can be terrible places to look for advice. A fool and his money are soon parted? Tell that to Donald Trump. Curiosity killed the cat? Don’t they have nine lives? Likewise, it feels like whoever said you can’t teach an old dog new tricks probably didn’t spend much time around dogs or maybe had a desire to blame previous owners for bad behaviour.

Sure, beer names are potentially no better a place to go when seeking sage advice, but Old Dog New Trick seems, at the very least, a more positive way to view the world. Behind the beer are Hop Nation and the good booze retailers at Blackhearts & Sparrows, who were both eager to use this hazy pale as a launching pad to explore the experimental hop HBC 630.

The can’s artwork features two of Blackhearts’ longstanding team members in Paddy and Pino; two pooches apparently eager to learn more about this hop too. The unnamed variety comes courtesy of the Hop Breeding Company, with HBC 630's flavour and aroma descriptors including cherry and raspberry along with more candy-like esters and creamy notes of peach and banana. Creamy is certainly an apt descriptor, with the first flavours and aromas to come forward one part ripe banana and another banana lolly, with some peach and cream thrown in too. That’s joined by more sherbet lemon, fruited candies and raspberry, and while that might sound like a lot to cover, each is in served in a fairly small portions. It means the beer's quite a light and refreshing pale, which not only makes it well-suited to summer but also suggests that maybe it’s true you can have too much of a good thing. OK, there's one you can believe.