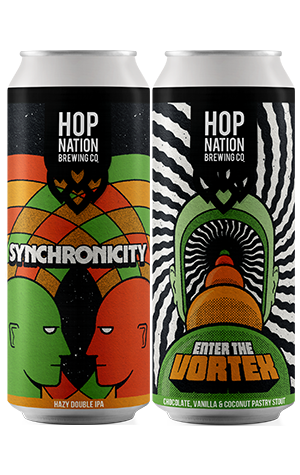 It feels that Hop Nation are a brewery that can’t really miss at the moment. Hot off the back of securing multiple trophies at 2021’s Australian International Beer Awards, they re-release a pilsner that secured them one of those trophies and it sells out online within 24 hours and then they release a brand new hazy that sells out in about the same timeframe. The new hazy in question is Synchronicity, a double IPA that weighs in at 10 percent ABV and features Vic Secret, Idaho 7 and the hop blend Falconer's Flight. It’s the kind of beer that’s well-covered territory for the brewery and this one's as pale, opaque and as dripping with fruit as any they’ve brewed. First off there’s a note of citrus that’s hard to distinguish between lemon and grapefruit rind but flickers between the two. That quickly becomes irrelevant though as that gives way to sweet swathes of pineapple juice. It’s not all tropical fruit though, with a whack of resinous pine turning up and a decent drop of bitterness coming in too.

Equally decadent in its flavours and also featuring a new design direction for the brewery - thanks to Melbourne's Mark Gamble - is Enter The Vortex. The chocolate, vanilla and coconut pastry stout has an incredibly smooth line running through it and is like drinking chocolate syrup served atop a vanilla and coconut ice cream. In fact, the idea of reducing it and doing exactly that did cross the mind but given how thick and rich the beer actually is, maybe that’s not even necessary.