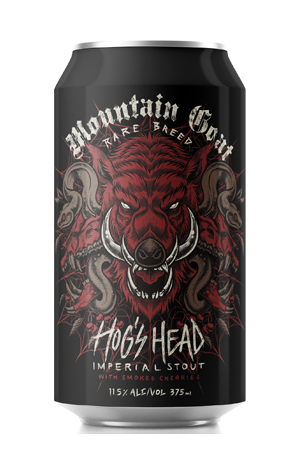 A hogshead is the name of a kind of large barrel, but when it comes to this Mountain Goat Rare Breed, the barrel is only part of the story.

Sure, it's important this beer was aged in a rum barrel and the oak makes it tender and gentle even as the rum adds a spiritous sweetness and warmth. But the element that caught my attention first when seeing the can was the smoked cherries. I’ve had cherries fresh, baked in a pie, preserved in sugar, soaked in brandy… but never smoked. The dark cherries were smoked over cherrywood (which seems either poetic or cannibalistic) by Melbourne's New-Orleans-inspired smokehouse, Le Bon Ton. While the cherry character itself is little more than a shadow in the background, giving a touch of acidity and pruney sweetness for balance, the smoke settles over the flavours with a subtle earthiness. It’s like you returned home from camping a week ago, and you swear there’s one item left in the house that hasn’t been purged of woodsmoke residue yet.

All of this, though - the rum, the oak, the cherries, the smoke - are nuanced tweaks to give the glorious base beer a few points of flair. The deepest black body, topped by a head that looks like a layer of chocolate mousse… that’s just good ol’ imperial stout. The soft cocoa, the thick body, the smooth roast, the sublime mix of sweet and savoury? Time in a rum barrel and additions of smoked cherries can add to this, but they can’t make it. I’ll wager this was a fine imperial stout from the moment it left the tank, and the added elements simply brought an extra spark.