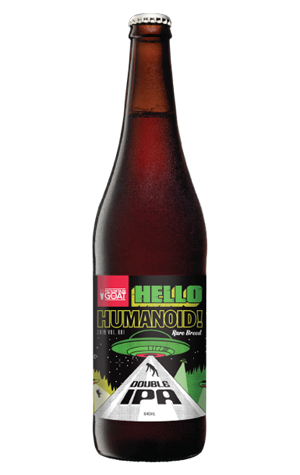 Given their success in picking up AIBA trophies for IPAs, it's around this time of year we've come to expect to see such beers make their way from Goat's Richmond HQ (although, given their brewers' love of IPAs, you can expect a dose of hoppy goodness coming out of North Street pretty much any time of year). This time around they've returned to double IPA territory, albeit at the lower end of the ABV scale for such beers. In many ways, however, this is a beer that, as the title and artwork suggest, sees them heading into new territory.

There's some malted maize in the mix from New Zealand's Gladfield Malt plus new hop variety Sabro from the US that is said to be capable of giving brewers "tangerine, coconut, tropical fruit, and stone fruit flavors, with hints of cedar, mint, and cream". Along with a bunch of other US hops, it's been added at the highest rate of any beer ever released by Goat (12g/L at the dry-hopping stage for the trainspotters).

So what's the result of this playtime? Well, the label might talk of citrus, of which there's plenty within the pale, hazy liquid, but it's of the deeper rather than sweet sort, joined by some piney and perfumey characters too. As you might expect from a beer featuring this many IBUs but in which the brewers want perceived bitterness kept low, there's some sticky sweetness at play too. And, while it's not as extra-terrestrial as some beers out there today, it's certainly occupies quirkier planes than many of the IPAs and double IPAs the brewery has released in recent years.

Available nationwide from March 2019 until stocks run out.