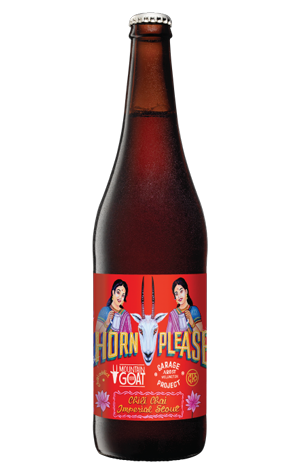 Mountain Goat and Garage Project share common traits when you look at the impact they've had on their respective beer scenes. The former drove the rise of craft beer more than anyone else in Melbourne and, while the brewery is now part of a global operation, they've kept tradition alive and continue to produce eye-catching (and frequently trophy-winning) beers at their Richmond HQ. Garage Project might not have been the first microbrewery to open in the Wellington region but few would argue against them having made the biggest impression over the past few years.

And now the two have become beer buddies with the release of Horn Please, a "chili chai imperial stout", which is the end point of a two-year discussion between Garage Project co-founder Pete Gillespie and Goat brewer Alana Rees. The chili chai element comes from the use of Chai Addict's Masala Chai, habanero and homegrown ghost chillies, while there's lactose in the mix too – not to mention a phonebook's worth of specialty malts.

The outcome is something that feels surprisingly old school, with the base imperial stout the sort you might have come across in the days when the British were up to no good in India: soft and deep rather than Bolshy, viscous and bitter. The chai spices are first to stand out, with the chilli perfume less apparent, while the lactose is just as subtle, rounding out the edges rather than making the beer sweet or bloated. The chocolate at the centre is underpinned by a drying earthiness and the faintest of chilli heat, with the whole affair rather more delicate than one might expect given the co-conspirators and the style they chose.

Launching here on May 12